Unless you live under a rock, you have either heard about or seen the documentary “Surviving R. Kelly.” It’s all about the performing artist accused of horrendous abuse against women. Movements have been underway to stop playing his music and for other artists to disassociate themselves from this otherwise undeniable musical talent. People attending his concerts, especially women, justify their attendance as keeping it “only about the music” and not the negative issues surrou 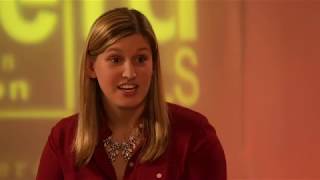 Paige Kassalen shares how she became part of the ground crew for the first solar powered plane to fly around the world. ​​ 7:35 | 2/1/19 | Season 1 ​ ​ This episode is brought to you by Epilog Laser. #S1E4SolarImpulseGirl

The first commercial use of a bar code scanner was at a supermarket in Ohio and was fully publicized and recorded. Credit: Yale University Press It's hard for us to envision a world with bar codes (also written as one word, barcode), those multi-width stripes on the corner of almost everything we buy or handle. For consumers, they have sped up checkout and made price tags all but superfluous. But their impact on the supply chain across all industries has been far deeper and m

Author Walter Isaacson writes about the series of disruptive technologies that have led to the current digital revolution. Image source: aspeninstitute.org/Patrice Gilbert In The Innovator’s Dilemma1, first published in 2000, Clayton M. Christensen defined two types of technologies: sustaining and disruptive. Sustaining technologies improve the performance of established products. Disruptive technologies “bring to market a very different value proposition than had been availa

Brian Muirhead No matter what the industry, getting there first with an idea that captivates the customer is the Holy Grail of engineering. But the chances for success in that quest typically hinge on building an engineering team with the imagination to conceive the next bright idea and the grit to make it a reality. Brian Muirhead, chief engineer of NASA’s Jet Propulsion Laboratory, knows well the challenges of grooming teams for risk-filled projects no one has attempted. In

Decisions on an Impulse

The Solar Impulse 2 airplane cuts a graceful silhouette. It has a slim singleseat cockpit with two propellers on either side, all below a lanky 236-ft wing. Look at the wing from above, and you’ll see the array of solar panels laid out along its top. In 2016, this solar airplane made its way around the world without fuel in 17 legs that stretched through day and night, including a five-day, five-night recordbreaking flight from Japan to Hawaii. The mission: use adventurous Ju